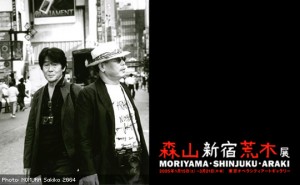 Exhibition and book concentrate on one prominent place in Japan: Shinjuku, an entertainment, business and shopping area in Tokyo with the largest red light district, Kabukicho, in Japan. Both artists photographed in this district from the 1960s until today.

I don’t know if Daido Moriyama and Nobuyoshi Araki ever worked together before this exhibition, but this is surprisingly the first show focussing on the two masters and they produced for the exhibition a series in Shinjuku last August. In total the exhibition features around 900! photographs, half of them not published yet. While Araki exhibits a mix of b/w and colour photographs Moriyama shows as usual his b/w photographs. Moriyama’s colour photography has not made it into museums yet, but it was already exhibited and published for the first time outside Japan in 2004.

Araki and Moriyama met very early in their careers at the end 1960s when Araki wanted to join the “Provoke” group (Takuma Nakahira, Daido Moriyama, Yutaka Takanashi, Koji Taki, e.g.), but was rejected, because he worked as a commercial photographer at that time. In 1974 Moriyama and Araki taught together at the private photographic workshop/school founded by Shomei Tomatsu. The other teachers were Eikoh Hosoe, Akihasa Fukase and Noriaki Yokosuka. Latest at the beginning of the 1990s Araki became Japans most famous photographer, notably when his international career took off with the “Akt-Tokyo” travel exhibition produced by Camera Austria, Graz/ Austria. Even Moriyama’s photography was/is highly influencial in Japan his international career just began a few years ago when in 1999 the SFMOMA held the first Moriyama (travel) exhibition outside Japan and then in Europe with an one man show at Fondation Cartier, Paris.
Note: It is not unusual that the final break through of a Japanese artist *in Japan* happens after he became a star internationally.