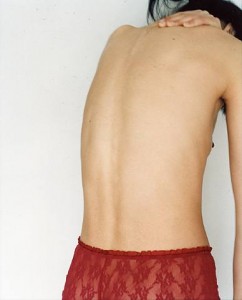 Over ten years ago when Yurie Nagashima won at age 20 the Urban Art#2 Award (1993) she became almost overnight the first “girly photographer” (onna no ko shashinka) in Japan. She and Hiromix who entered the scene in 1995 became role models for many young Japanese women and inspired them to become a photographer too. Since then the number of female photographers in photography schools increased considerably to around 50%. Both, Yurie Nagashima and Hiromix, talked about themselves and their lives through their pictures, but IMHO Nagashima was and is much more personal in her work not only depicting her friends but also the daily life of her family (including nude photographs of her father and mother).

Nagashima’s and Hiromix’ career took very different ways since the mid-1990s. While Hiromix became a star who concentrated on her commercial work with famous Japanese actors, actresses and pop stars, Nagashima left Japan to study photography in the US. After her return to Japan, she published in 2000 her book “Pastime Paradise” which gives an overview of her work. Now four years later she exhibits her recent work “Candy Horror” at gallery Scai the Bathhouse and “not six” at Nadiff Gallery. Additionally her new book “not six” is published this month – it’s already on my wishlist :-).