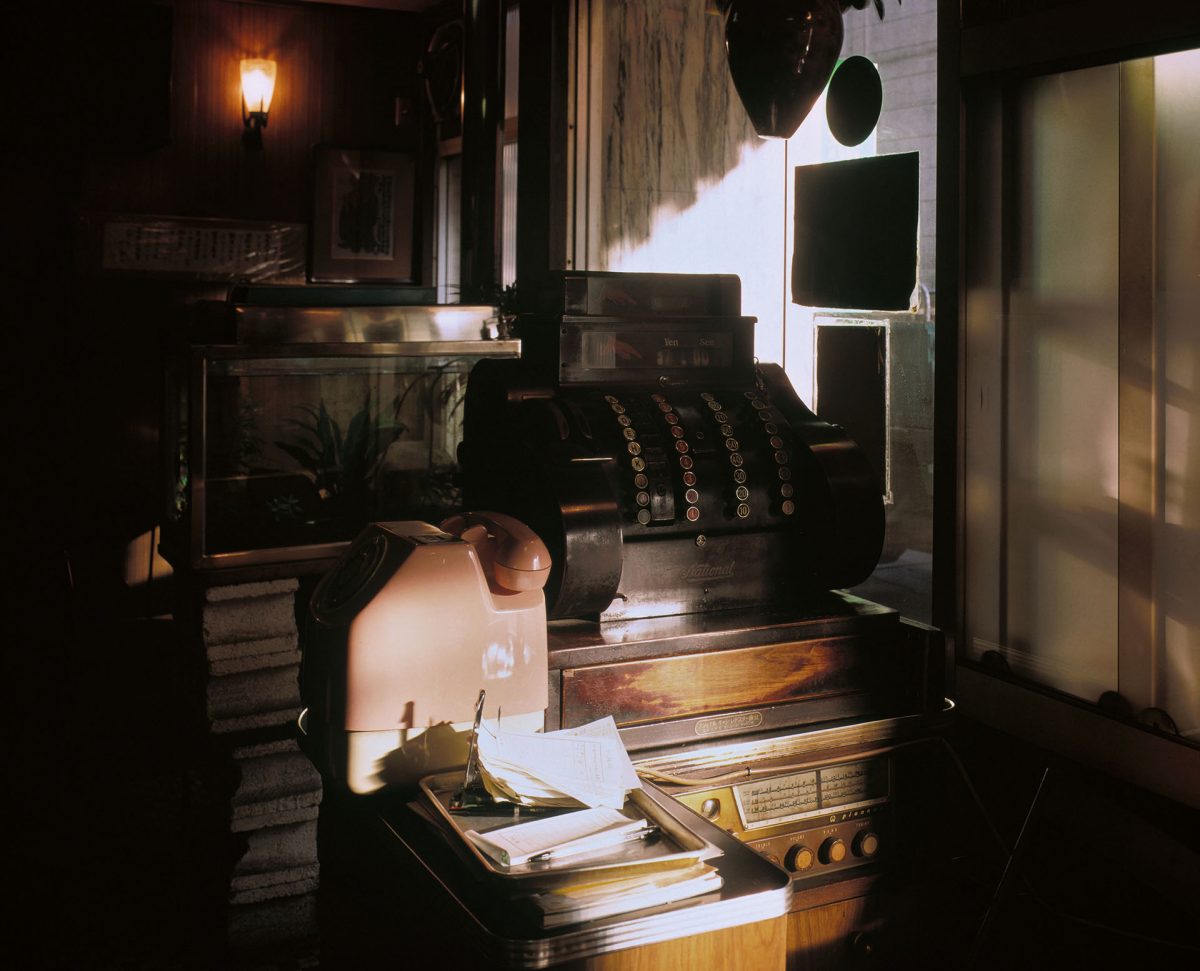 Following Toshi-e, Yutaka Takanashi also devoted himself to the traditional side of Japan while remaining with his favourite subject, Tokyo. In 1975, he photographed the city’s old shitamachi suburbs, which had escaped demolition so far. He shows the part of the city that has only given way to modernity to a limited extent, and where the old, traditional prewar Japan has not yet been displaced. 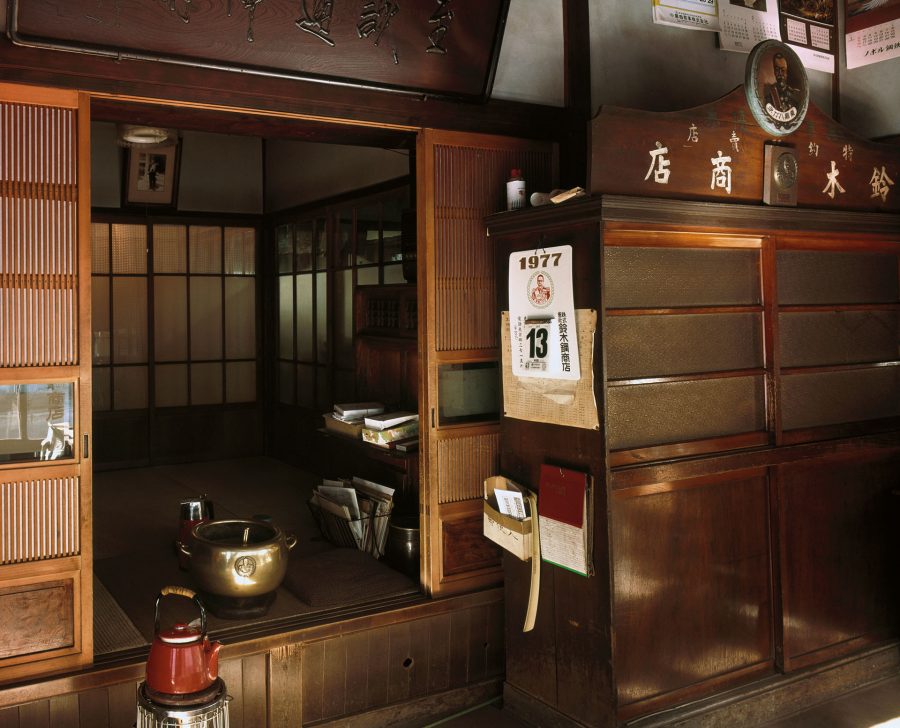 With this work, Takanashi once again assumes the position of the “scrap picker”, aiming to portray what he sees with maximum precision. To this end, he changes his photographic style yet again, putting aside his 35mm camera in favour of a plate camera with 4×5 inch colour negative plates. After having frequently taken photographs for Toshi-e from a moving car, Takanashi’s movement comes to a standstill for this project, which involves exposure times of up to 20 minutes. The change from 35mm camera to plate camera was seen as a necessity by Takanashi for several reasons: to get right up close to his “suburban” theme, to confirm his own “look” and to emphasise the basic function of the photography as a medium for keeping records . The works appeared in Asahi Camera at irregular intervals in spring 1975 and in 1977, Takanashi published the series of colour photos in the large-format volume Machi (Town). 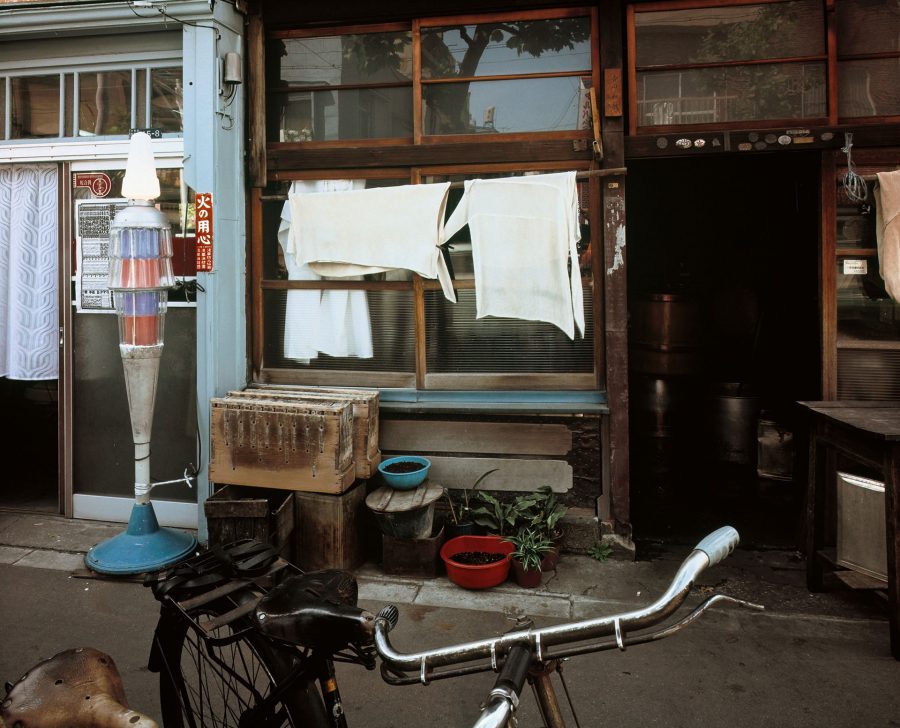 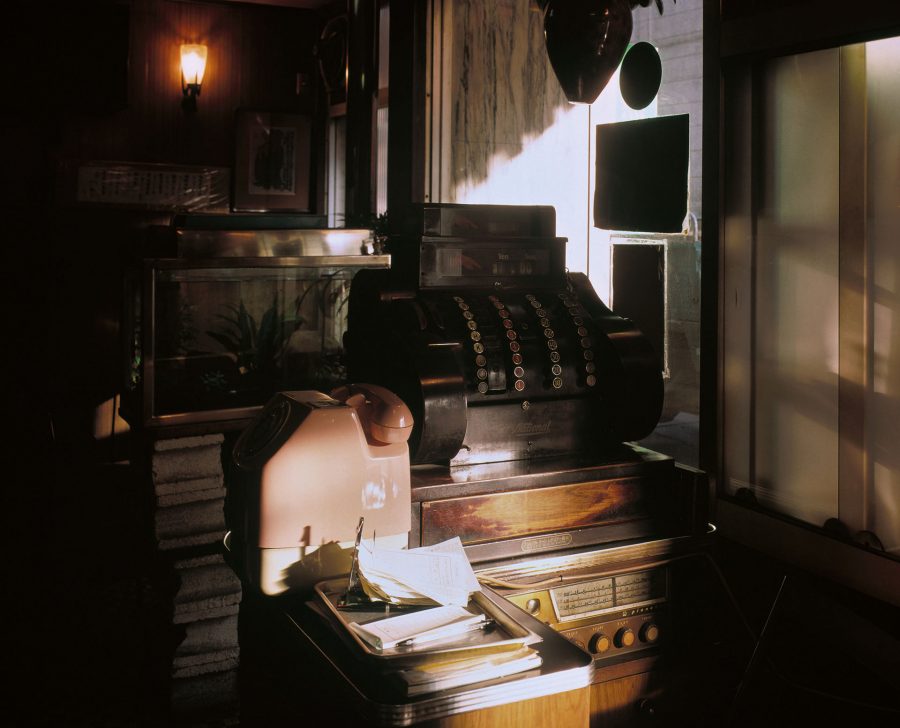 In Machi he shows the small, narrow streets of the shitamachi, the brick and wood buildings and, above all, the display windows and interiors of the small, old-fashioned shops and businesses. Automobiles, symbols of a fast-moving, progressive society, are few and far between in the pictures.
By using large-format colour negatives, Takanashi was able to depict his scenes with great precision and attention to detail. The colour has a number of different roles here: it provides far more information than black-and-white photography and it allows the photographer to emphasise motifs within the picture, thus directing the observer’s attention toward certain everyday objects and products. Needless to say, colour is also a means of abstracting the objects he finds. Takanashi bathes his pictures in warm brown and yellow tones, often accentuated with red and blue objects. 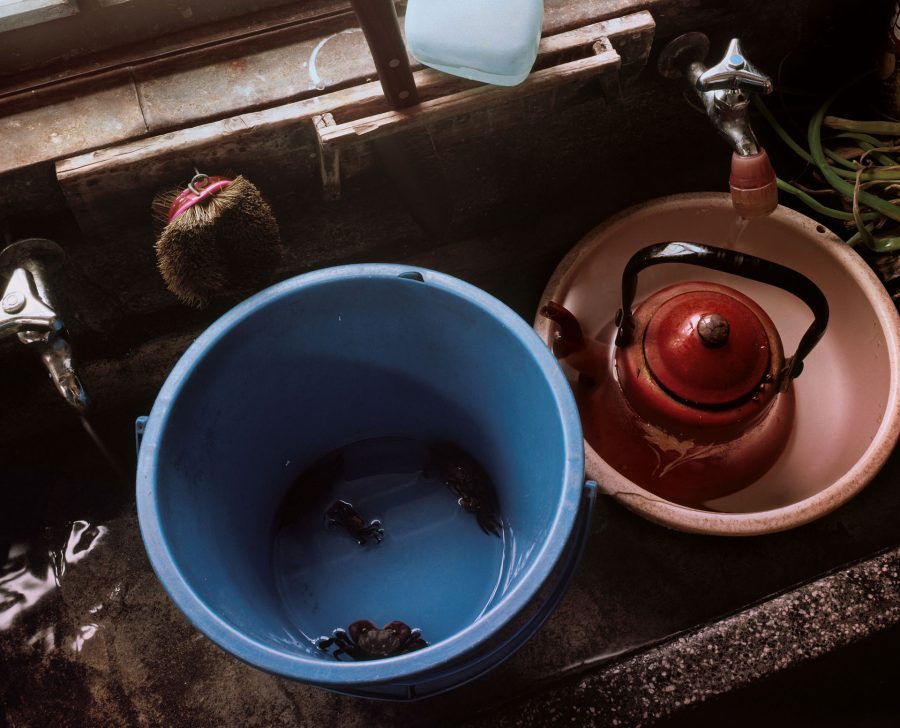 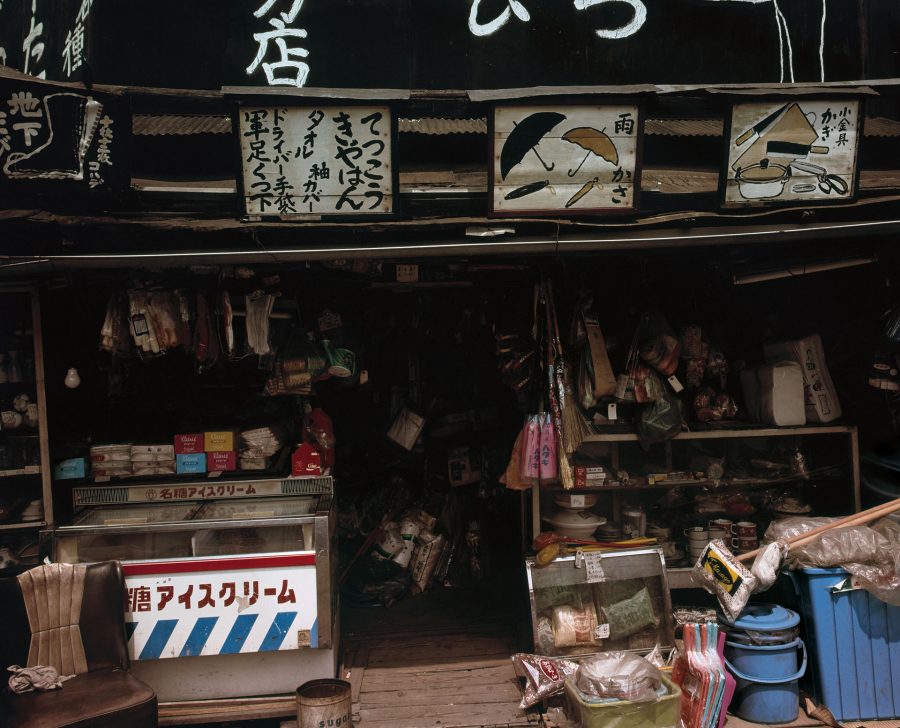 The contrast between Toshi-e and Machi could not be greater. While Toshi-e creates a vision of a dehumanising environment in raw, cold images, Machi uses warm colours to conjure up an urban landscape that appears to be brimming with life. As with Eugène Atget’s portraits of Paris at the turn of the 20th century, the many objects in Takanashi’s photographs – the goods, the parked bicycles, the open shop doors – all indicate the presence of the unseen people who appear to have just left the scene. With Machi, Takanashi offers a counterpart to Toshi-e, clearly aware that the images from Machi will soon be reminders of a past age.

Text of the City – Shinjuku

After completing Machi, Takanashi went back to his 35mm camera[2]For the series “Tokyo-Jin 1978-1983”, published 1983., only to switch back to plate camera again in the early 1980s. This gave rise to the “Text of the City – Shinjuku” colour series, which was published in Asahi Camera in 1982-83 [3]For editorial reasons, Asahi Camera did not publish the entire series and it was not completed by Takanashi. Rei Masuda: “Field Notes of Light”, in: Yutaka Takanashi. Field Notes of Light, exh. … Continue reading. In this series, Takanashi photographed bars and streets in Shinjuku based on Kevin Lynch’s urban planning theory. Here, Takanashi focused on spatial elements such as streets and inside walls, which Lynch saw as being part of the “mental maps” used by city dwellers to find their way around [4]Ibid. P. 146. 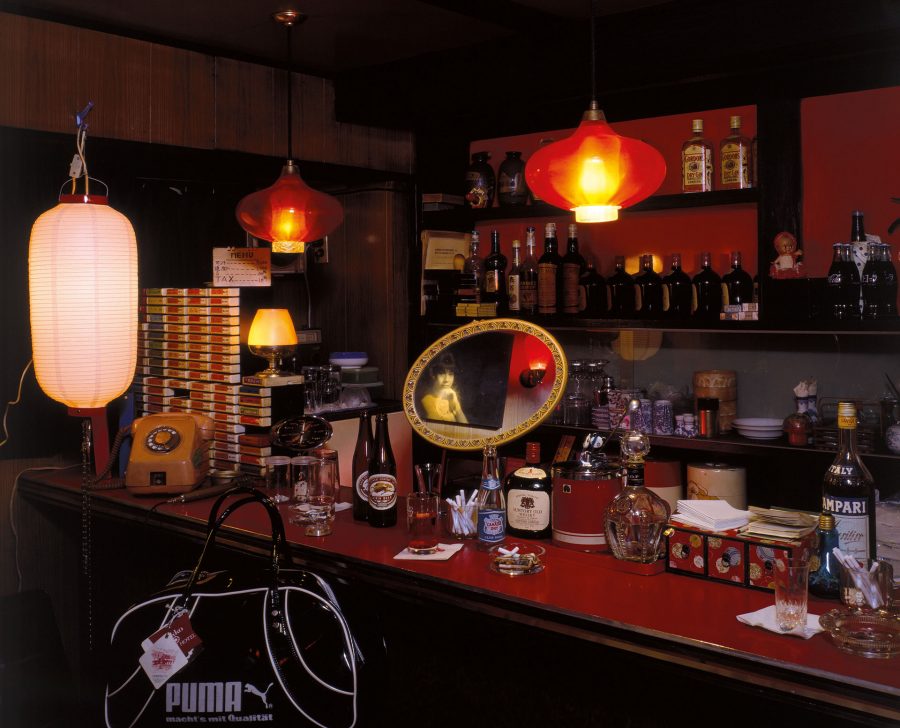 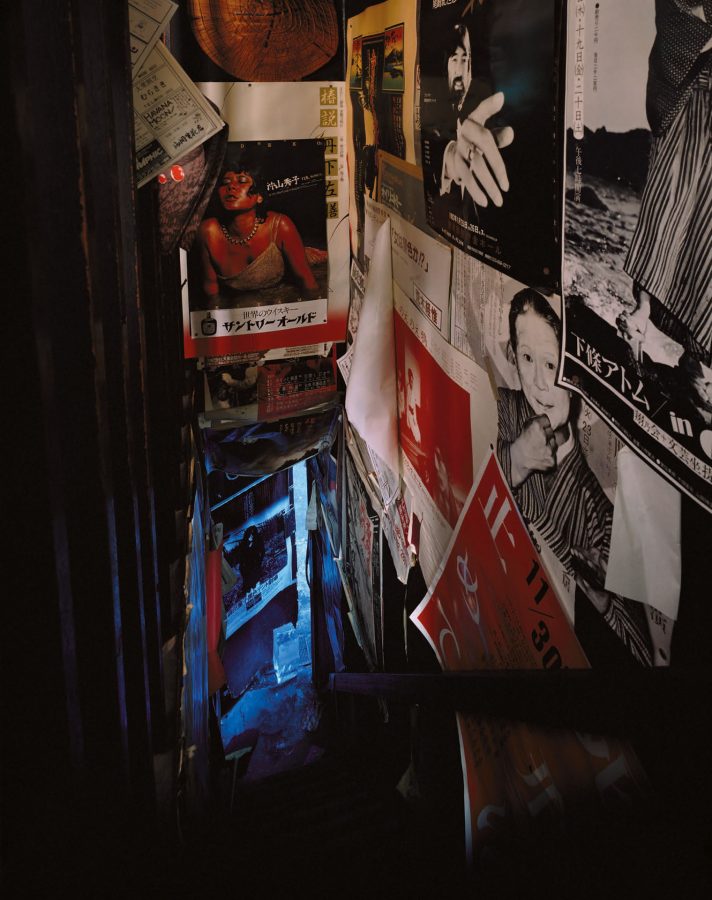 The change in photographic technique substantiated Takanashi’s rational use of the medium of photography. With his choice of camera, he fell in line with the changing realities in Japan’s capital. He used the 35mm camera in motion to record the constant flow of the city and, in the case of Toshi-e, he was a “hunter” seeking to capture his still-latent vision of Japan in a series of photographs. 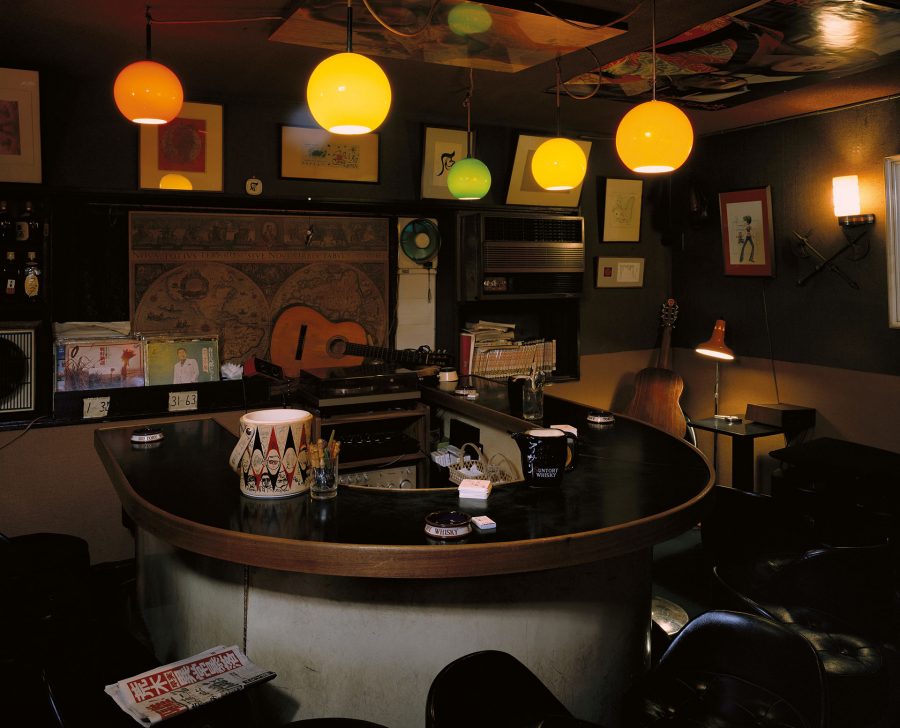 The plate camera enabled him – in “scrap picker” mode – to create a precise document of what he saw and to make time stand still long enough to gaze on the last remnants of traditional life and architecture, doomed by the breathless pace of change in Tokyo and Japanese society: “I have taken many pictures of changing city according to the time. I changed camera. I changed distance from objectives. I changed walking speed when I took pictures. My aim is not to make a pile to heaven of masterpieces in the pyramid shape but to walk on the ground to make anonymous pictures. I will keep on walking far and far in forming infinite line and it should be.” [5]Yutaka Takanashi. In: Yutaka Takanashi. Artist Statement. 2010, in English, not published.